Posted on 4 September, 2020 by marleenschans
in: Categories: News.

CALL FOR PROPOSALS: The Getty Research Institute and the Getty Villa 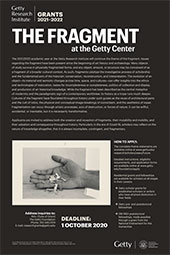 The 2021/2022 academic year at the Getty Research Institute will continue the theme of the fragment. Issues regarding the fragment have been present since the beginning of art history and archaeology. Many objects of study survive in physically fragmented forms, and any object, artwork, or structure may be conceived of as a fragment of a broader cultural context.

As such, fragments catalyze the investigative process of scholarship and the fundamental acts of the historian: conservation, reconstruction, and interpretation. The evolution of an object—its material and semiotic changes across time, space, and cultures—can offer insights into the ethics and technologies of restoration, tastes for incompleteness or completeness, politics of collection and display, and production of art historical knowledge.

While the fragment has been described as the central metaphor of modernity and the paradigmatic sign of a contemporary worldview, its history as a trope runs much deeper. Cultures of the fragment have flourished throughout history under such guises as the reuse of architectural parts and the cult of relics, the physical and conceptual image-breakings of iconoclasm, and the aesthetics of repair. Fragmentation can occur through artistic processes, acts of destruction, or forces of nature. It can be willful, accidental, or inevitable, but it is necessarily transformative.

Applicants are invited to address both the creation and reception of fragments, their mutability and mobility, and their valuation and consequence throughout history. Particularly in the era of COVID-19, scholars may reflect on the nature of knowledge altogether, that it is always incomplete, contingent, and fragmentary.

Getty Villa: Phoenicians, Philistines, and Canaanites: The Levant and the Classical World. For a second year, the 2021/2022 term of the Getty Scholars Program at the Villa will focus on the ancient cultures of the Levant and their relations with the classical world. Lying on the eastern seaboard of the Mediterranean, the Levant was a crucial crossroads between the classical world of Greece and Rome and the kingdoms of the Near East. Home to the ancient peoples of Phoenicia, Ugarit, Canaan, Philistia, Jordan, Israel, and Judah, this region participated in a vibrant Bronze-Age network of trade that flourished for many centuries until a combination of warfare, migration and famine around 1200 BCE destroyed these palace societies.

In the first millennium BCE, a Greek-Phoenician rivalry for control of colonies and seaborne trade routes as far west as Spain caused considerable conflict but also bore fruit in the diffusion of alphabetic scripts and cross-influences in literature, mythology, and the arts. The conquest of the Levant by Alexander the Great in 331 BCE and its absorption into Rome in the first century BCE resulted in Greco-Roman style becoming the public face of institutional culture and Greek vying with Aramaic as the vernacular language. Rome, too, was transformed by the encounter, especially through its conflicts with Judaism and the early followers of Christ, which had tumultuous consequences for the Holy Land and the Western world.

For more information about each theme please visit http://www.getty.edu/research/scholars/years/future.html.