The Technical Art History Colloquium on 14 June 2018 was organised in the Rijksmuseum Amsterdam by Sven Dupré and Erma Hermens. Invited speaker was curator, writer and historian Glenn Adamson (Senior Scholar at the Yale Center for British Art) who gave a presentation titled ‘Minding Making: Hands On Learning in the American University’. Please watch his lecture here:

Minding Making: Hands On Learning in the American University

One of the most striking developments in the humanities over the past decade has been a ‘material turn’. This cross-disciplinary current, seen in art history, the history of science, museum practice and elsewhere, has challenged previous theoretical models by insisting on the importance of tacit knowledge and craft-specific content. Rather than distinguishing making from thinking, scholars now see the two as inextricable and mutually generative. In this talk, Dr. Glenn Adamson discusses how these developments are playing out at three leading American universities: Columbia, Yale and Harvard. Each of these institutions has undertaken substantial making-based research and teaching in the past few years, but in varying directions: at Columbia, an emphasis on the recreation of techniques based on archival documents; at Yale, an emphasis on the material intelligence contained in historic crafts; and at Harvard, a thematic investigation of contemporary making, based on the connective concept of the ‘maneuver’. Adamson surveys this intellectual landscape and provides a first hand account of the creation of Minding Making, a new web initiative based at Harvard.

Glenn Adamson is a curator, writer and historian who works at the intersection of craft and contemporary art. Currently Senior Scholar at the Yale Center for British Art, he has previously been 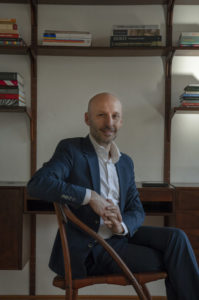 Director of the Museum of Arts and Design; Head of Research at the V&A; and Curator at the Chipstone Foundation in Milwaukee. Adamson’s publications include Art in the Making (2016, co-authored with Julia Bryan-Wilson); Invention of Craft (2013); Postmodernism: Style and Subversion  (2011); The Craft Reader (2010); and Thinking Through Craft (2007). Most recently Adamson was the co-curator of Voulkos: The Breakthrough Years at MAD (2016); curator of Beazley Designs of the Year, at the Design Museum in London (2017); and co-curator (with Martina Droth and Simon Olding) of Things of Beauty Growing: British Studio Pottery, at the Yale Center for British Art (2017). His new book Fewer Better Things: The Hidden Wisdom of Objects will be published by Bloomsbury in August 2018.