Posted on 17 January, 2017 by Jill Briggeman
in: Categories: Blogs.

In Waking Hours: historical reconstruction, film, and why we need more diversity in academic output

On 6 December 2016 Katrien Vanagt, a historian of science and filmmaker, gave a guest lecture on early modern experiments in anatomy and optics within Prof. Sven Dupré’s Master course “Art and knowledge: Light, Color and Perspective in Art” at University College Utrecht. First, we watched her documentary In Waking Hours, co-produced with film maker Sarah Vanagt, followed by a hands-on session in which the students built their own camera obscura’s. In this blog, I reflect upon the documentary In Waking Hours as a research method and pedagogic tool to explore experiential aspects of early modern experimental practice. Moreover, I argue that Vanagt’s film encourages humanities researchers to engage with their research matter hands-on and to experiment with unorthodox media and formats to do and present research, despite the pressure for conformity in our current academic research landscape. 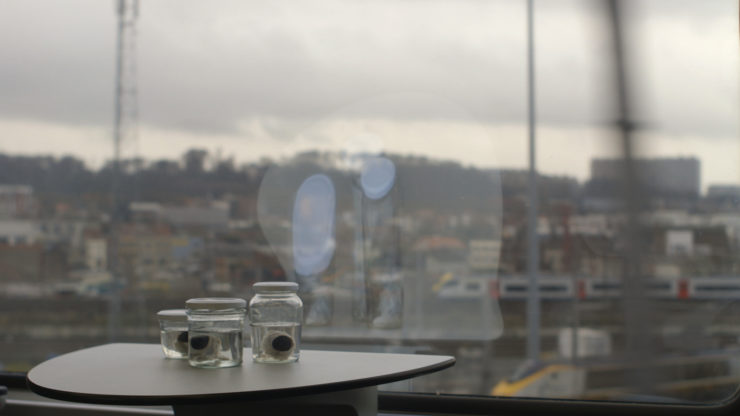 Vanagt’s class began with an introductory lecture that took us back into the seventeenth century Amsterdam of the well-known Dutch physician Plemp. Her narrative reminded me of research I did years ago on the same experiment for a dissertation chapter on Descartes’ anatomical experimentation. Her lecture, film, and the experiences she shared with me provided a much richer impression of this famous experiment than I previously had from studying only textual sources. 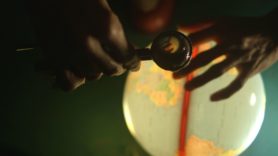 In 1629 somewhere in Amsterdam not far from the slaughterhouses in the Kalverstraat, two learned men with a growing reputation in medicine and natural philosophy spend a winter at home “anatomising at leisure”, probably together for many long hours. One teaching the other the delicate art of dissecting ox eyes: carefully removing the eyes’ outer layers, without breaking the vital membranes that enclose its inner fluids. Both men operating with deft hands in the early hours of the morning, the waking hours, when the living tissues of freshly slaughtered oxen slowly die in the anatomists’ hands. Together they work on an experiment to make the physical operations of the eye visible, they want to actually ‘see’ how vision works. ‘Seeing’ how nature works and making its workings visible for others is not magic or abstract speculation, but depends on getting it right at the right moment, with good materials, appropriate tools, and swift finger work despite the cold. The stakes are high, centuries of speculations on vision had preceded their explorations, many wise words had been written by both the ancients and their contemporaries. Both know these theories well, they studied them minutely. Refuting them will not be easy, first they need to see themselves how it works, then they will have to share their experiences so that others can see “with their own eyes” what they saw. Making ’new science’, seeing what others have not seen yet is a laborious endeavour. It requires hard-won skills that need to be honed in long hours of experimenting with deeds and words. 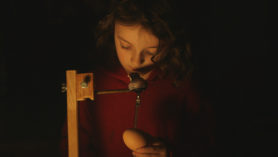 In 2015, almost 400 years later, during a cold winter in the Low Countries, two young women, a historian and a film maker, board a train at dawn. With them travel three fresh ox eyes, bottled up on water. There is no time to lose, as the eye balls of the dead oxen will keep their function for a just a few more hours. This will give the women just enough time to reach their destination, set everything up and start filming. It is not the first time that the historian will take up a scalpel. Slowly, but without hesitation, she makes the first cut. Her hands know what to do after many hours of training in dissecting ox eyes. Weeks before they started filming, she had started to familiarise herself with the skilled vision that an anatomist develops in practice. Today, the eye ball feels familiar to her touch. No reconstruction without gaining material literacy first.

Precisely speaking she is not conducting a camera obscura experiment, she is reconstructing her reading of an experiential report written and published in seventeenth century Amsterdam by the young physician Plempius and his fellow anatomist Descartes who included a detailed recipe for this experiment in his famous treatise on optics. The two women share a fascination with the anatomists. They too want to make the invisible visible, to experiment with new ways of visualisation and communication: the filmic reconstruction of an experimental experience. What the students see in the darkened class room today is an experiment in voicing what remains unspoken in historical sources. 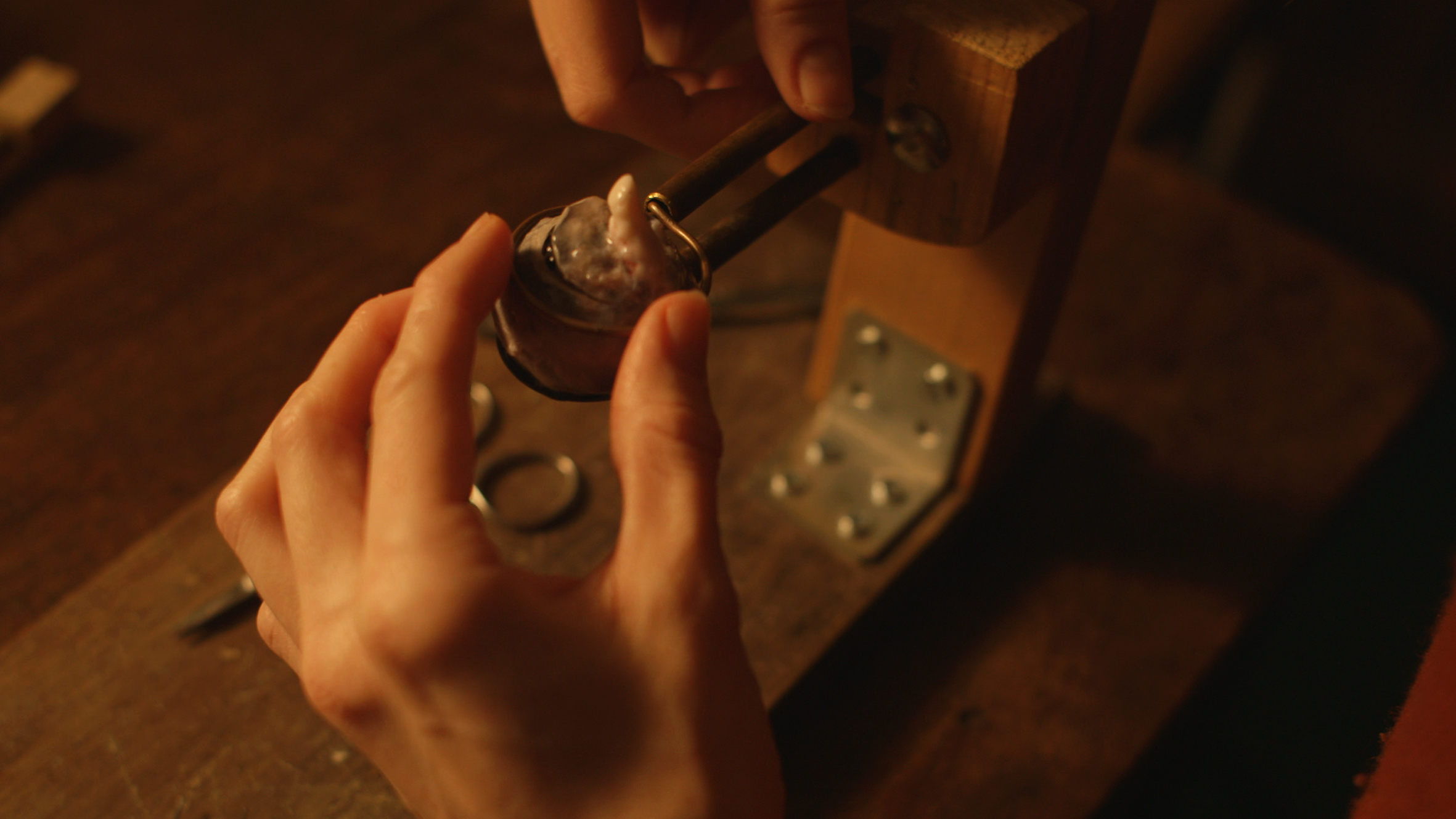 Like many other reconstruction projects, the making of the film In Waking Hours would be unthinkable without collaborators and external funding. The makers mobilised colleagues at the university to get their hands on freshly slaughtered ox eyes (a rarity since BSE), family and friends to help with the production, and a generous house owner to provide the right setting. Their film work is in its own right perhaps just as challenging to established ways of knowing as Plempius’ and Descartes experiments where in their own time. Stakes are high in our current academic world. It takes courage to experiment with ways of doing and presenting research that do not (yet) fit comfortably into the publication categories of the academic research evaluation industry. This film is more than a beautifully made documentary of early modern experimentation, funded as an outreach activity with means from national scientific organizations. It is a visual statement. It demands experimental space for academic research and how academics choose to make their insights public. It is also a methodological exploration of hands-on doing and visually presenting research in a text-dominated discipline. It makes a powerful case for visualising experiential research as form of sensory auto-ethnography and historical research. Katrien and Sarah Vanagt’s reconstruction project is a compelling film experience, magical in its simplicity and mundaneness. We see a mother working concentrated on an ox eye at the kitchen table, children jumping outside in the backyard. Later they join her and learn how to look through a dissected eye ball to see the world unfolding upside down on its uncovered backside. Anatomy at one’s leisure, no artists in lab coats, no historians in the laboratory. Instead we get a sense of the art of dissection as a scene of (early) modern domesticity. As such this unorthodox documentary might make policy makers uneasy who are used to sell science as a white-man-in-a-lab-coat soap opera. This film is a rare exotic; especially in today’s humanities research world, it is a potent manifestation of collaboration across disciplines and academic and non-academic divides. And with its empowering and invigorating ‘hands-on DIY research attitude’ rarely to be found in our current academic landscape. In Waking Hours is a powerful didactic tool for a new generation of scholars and deserves to be seen by many. If you get a chance: go and see it! However, life is short in the filmworld and after two successful years of touring to festivals around the globe public viewings will become rare. So my advise: Get crowd-funding, organize your own screening with Katrien Vanagt and make In Waking Hours viral.