Michael Faraday and the Chemistry of the Elgin Marbles

In 1837, the English chemist Michael Faraday (1791-1867) sent two letters as a response to the committee in charge of the examination of the famous and controversial Elgin marbles displayed at the British Museum (image 1). The marbles can still be appreciated in the museum nowadays. The reason for this examination was to determine whether the objects presented traces of original paint on their surface. But why was a renowned chemist like Faraday writing letters to a museum committee? These letters contained information related to paint samples: small pieces of material that had been extracted from the marbles and sent to Faraday to perform chemical analysis on them. 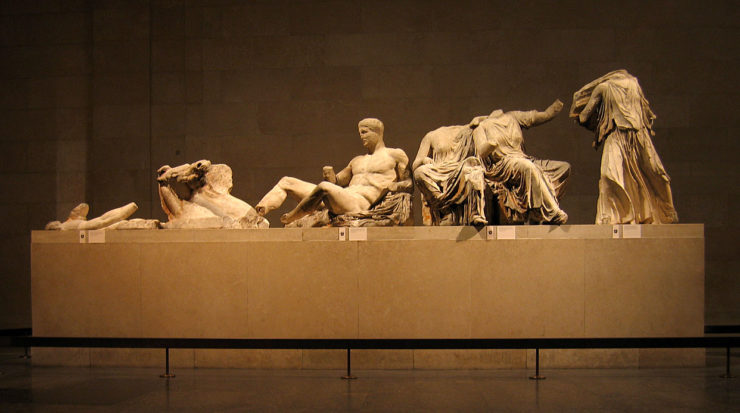 These beautiful sculptures, removed from buildings in Athens, arrived at the museum in 1817 (image 2), and were moved to new galleries in 1832. The controversies about their status as artworks and their restoration treatments arose even before the marbles arrived at the museum, and continued during the nineteenth and twentieth centuries (Jenkins 2001: 1–6). Between 1836 and 1837, the selected committee worked on the examination of the marbles. A report about its findings was read by committee member William Richard Hamilton (1777 – 1859) at the closing ordinary Meeting of the Session in 1837, and published in 1842 in Transactions of the Royal Institute of British Architects of London (Hamilton 1842). This report, quoting Faraday´s letters, is one of the few publications about pigment analyses of artworks in nineteenth-century England. In a period where such analyses were not common practice for the treatment of polychrome artworks, questions regarding the motivation for such procedures arise: Why were these specific samples extracted from the objects and sent for chemical analysis? 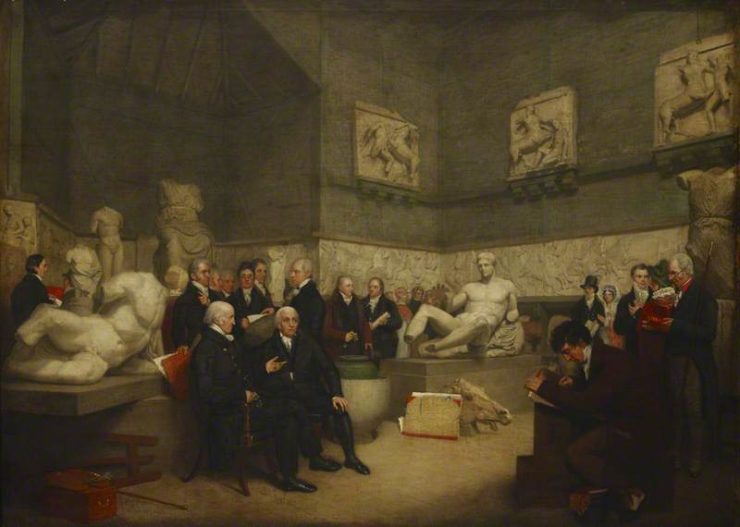 The examination of the marbles took place during an international controversy about polychromy in Antiquity. Such a controversy occurred during the nineteenth century in several countries, especially in France, Germany, Italy, England, and by the end of the century, also in the United States. The classical Western ideal of beauty represented in Greek and Roman white pristine marble has its origins in the late Renaissance and remained canonical until the early nineteenth century. Although the presence of colour in Greek architecture and sculpture had been acknowledged since the eighteenth century – for instance, by Hegel and Winckelmann, this evidence was mostly ignored or disregarded as non-classical practices (Drost 1996: 64; Summitt 2000: 2). The main reason for this attitude towards polychromy in classical Antiquity was that it challenged aesthetical, philosophical and ideological canons of Western art (Østergaard 2008: 3). Gottfried Semper (1803-1879), one of the major voices in this controversy, wrote:

Monumental polychromy must now, therefore, be considered in a new light. It is no longer the enthusiastic speculation of a few artists or antiquaries, but the historian, the scholar, the antiquary, and the artist, all unite to support its evidence with their authority; and at length it commences to be appreciated by the public, who are becoming weary of the monotony of naked architecture. (Semper 1860: 233–34)

Considering that the aim of the report written by the committee was “to ascertain whether any evidence remains as to the employment of colour in the decoration of the architecture of sculpture” (Hamilton 1842: 102), it can be assumed that the controversy about the use of polychromy by the Ancients was the main motivation for the chemical analysis of paint samples from the surface of the Elgin marbles. Furthermore, the examination was not only influenced by this debate, but also had an influence on it. This showed clearly in 1854, when, more than a decade after the publication of the report by the committee, the re-opening of the Crystal Palace took place with a controversial exhibition displaying plaster casts of the Elgin marbles with their alleged original colours.

Hamilton, W.R. 1842. ‘Report of the committee appointed to examine the Elgin Marbles’, in Transactions of the Royal Institute of British Architects of London, Vol. I Part II: 102–8. London: Longman, Brown, Green, and Longmans.

Semper, G. 1860. ‘On the study of polychromy, and its revival’, in The museum of classical antiquities: being a series of essays on ancient art, 1: 228–46. London: Longman, Green, Longman, and Roberts. Link