Join the EMC Imprint and Museum Hof van Busleyden for the official launch of Burgundian Black: Re-Working Early Modern Colour Technologies!  Edited by Jenny Boulboullé and Sven Dupré  as part of the ERC ARTECHNE Project, Burgundian Black is an open access work of multimedia scholarship exploring the significance and production of black dyes and pigments in the Burgundian-Habsburg Netherlands. The result of collaborative, hands-on research with curators, conservation scientists, historians, and the acclaimed artist Claudy Jongstra, Burgundian Black breaks new ground in our understanding of a lost colourworld. Returning us to Renaissance Europe when black dress became a distinctive expression of chromatic politics, the authors unravel the secrets of dyeing textiles in sumptuous black shades that dyers came to master at the height of Burgundian power. Moving from the world of fashion to the world of manuscript, Burgundian Black also shows how miniature portraits of the black-dressed duke, say, might become powerful instruments of propaganda at a time that manuscript illumination reached unprecedented heights.

To expand our understanding of chromatic history, Burgundian Black works through the practical concerns of black dyeing and pigment making through re-workings of early modern colour technologies. Its contributions show that by studying chromatic expertise across a variety of artisanal media, including textiles, oil paintings, illuminations, and woodblock illustrations, we can gain a deeper understanding of shared worlds of colourknowledge and the political affordances of black in early modern visual culture. 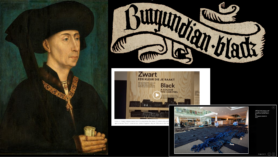