RT @JessieWHChen: This is totally extra, but I wanted a nice organization to store and display the pigment samples I’ve accumulated from th…

On 12-15 June, the eighth annual Scientiae conference will be held at Queen’s University in Belfast, a forum for interdisciplinary research on early modern intellectual culture.The premise of the conference is that modern divisions of knowledge are alien to the period’s epistemic landscape. Therefore, we need to try to fuse our own disciplinary horizons—modern by definition—if we are to understand the period.

Sven Dupré will organise and chair a parallel session on Perspective as Practice: Sites of Optical Knowledge. Speakers are: 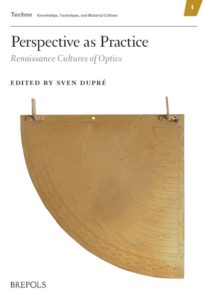 This session is connected to a book about the development of optics and perspective between the fifteenth and seventeenth centuries, which will be published in Brepols’s ‘Techne: Knowledge, Technique and Material Culture’ series in 2019. Our point of departure is the recognition of the plurality of meanings of perspective. The ways in which optical knowledge was used by different groups in different places (such as the anatomist’s dissection table, the goldsmith’s workshop, and the astronomer’s observatory) defined the meanings of Renaissance perspective. Most interestingly, sites such as the theatre and the garden were home to practices of perspective which have remained on the margin, or even completely invisible, in the historiographies of optics and perspective.

In the early modern period, medical students, university professors of various disciplines, and the general public were exposed to visual theory during at least some public dissections of the eye performed at anatomy theaters. Topics related to vision at these events include the philosophy of visual perception, accounts of light and color, discussions of the controversy over intromission versus extramission, and the rudiments of perspectiva or the science of optics. Andreas Vesalius, Hieronymus Fabricius ab Aquapendente, Johannes Kepler and others factor into this narrative. The humanistic recovery of Galen’s works, debates over method, the (largely successful) struggle for anatomists to increase their professional status, and interdisciplinary work spurred on by competition at universities provide context.

Theatre became a privileged site for experimenting with perspective during the 16th and 17th centuries. At the same time, the perspectival stage was also instrumental in exhibiting and formulating political power in the dawn of absolutism. As formulated by Nicola Sabbattini in 1638, the view on the perspectival scenery was perfect only from the seat of the prince (‘il luogo per il Prencipe’). Highlighting the political signiﬁcance of this kind of seating distribution has become a commonplace among scholars when dealing with the role of perspective in early modern courts. However, little attention has been paid to how exactly the point of view of the perspectival stage was conﬂated with the seat for the prince. This paper will focus on this speciﬁc convergence of etiquette and optics that took more than a century.

To his contemporaries, John Evelyn’s (1620-1706) reputation rested largely on his expertise in gardening. He wrote on the topic and his garden at Sayes Court in Deptford. This paper concerns one small enclosure at Sayes Court, the ‘dial garden’, examining its spatial structures in dialogue with Evelyn’s writings on perspective and astrology. Turning to the dial garden, curiously, we ﬁnd that Evelyn ignored some of his own directions on perspectival ordering. I suggest that Evelyn’s concern with optics relates not only to the view of the ‘spectator’ but also to the geometry of the ‘celestial light’ that falls across the dial-like face of the garden and this accounts for seemingly aberrational alignments and elongations of the little enclosure.

Georges Farhat (Toronto), “Towards a contribution of early modern landscape design to the historiography of perspective.”

If studied within the design techniques it informed, early modern perspective turns out to have been more closely entangled with optics than has hitherto been acknowledged. Looking in particular into French seventeenth-century designed landscapes, this paper will present select aspects of sociotechnical and territorial appropriations of perspective that were inseparable from optics. I will show, with a few examples, how workshops, worksites, and treatises pertaining to diﬀerent disciplines were blended in design to shape perspective as a constructive modality of geometrical optics. My argument rests on a methodology that articulates ﬁeldwork and survey with evidence from manorial accounts and institutional controversies along with the study of design drawings.