RT @JessieWHChen: Learn about stone & glass in making early modern sculpture/decorative art from @DupreSven + cast your own metal object! A…

RT @MarjolijnBol: Who comes join my team to investigate the history of durability in art?! Two PhD positions in the ERC-project Dynamics of…

The Devil is in the Details: Turpentine Varnish 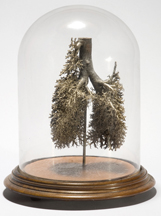 Corrosion cast of bronchi and trachea, possibly from a rabbit, sheep, or dog, 1880-1890
Likely prepared by Harvard anatomist Samuel J. Mixter.
The Warren Anatomical Museum in the Francis A. Countway Library of Medicine.

One of the first things you learn when you do reconstruction research is that the tiniest detail can make a difference. Recently, I wanted to prepare an injection wax for corrosion preparations according to a 1790 recipe. Corrosion preparations are anatomical preparations created by injecting an organ with a fluid coloured wax that hardens. The organ is then lowered into a container with a corrosive substance, such as a hydrochloric acid solution, which corrodes the tissue, leaving a negative image of the veins and arteries of the organ. These preparations were made from at least the mid-eighteenth century, but because of their fragility, very few remain. As they were supposedly difficult to make, corrosion preparations were not only a way of studying anatomy, but also a tool for self-fashioning and establishing one’s status as an anatomist. 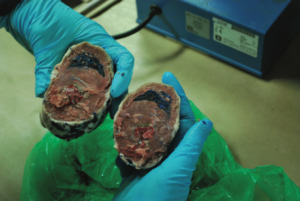 I have tried to create an injected preparation in the past.[1] It was my first attempt at reconstruction research ever, and although it served me well at the time, now I do things differently. Most importantly, I want to stay much closer to the original recipe if possible. When we made the injected preparations in 2012, we used modern substitutes for some historical ingredients for economic reasons, and we did not have the time to study every ingredient in detail, substituting those we could not find directly with something we thought would have pretty much the same effect.

The recipe I want to use, Thomas Pole’s 1790 instruction for making a corrosion preparation, calls for a coarse red wax, made from fifteen ounces of yellow bees wax, eight ounces of white resin, six ounces of turpentine varnish, and three ounces of vermillion or carmine red.[2]The wax, resin, and pigment are fairly straightforward.

What is turpentine varnish though? Back in 2012, we ended up using just turpentine rather than turpentine varnish, and although those injections were not meant to be corroded, we ran into numerous problems. For example, it turned out to be almost impossible to keep the wax and the organs at a temperature at which we could both handle it and have it fluid enough to inject. It made me wonder whether sticking with the original recipe could solve that problem, so I set out to recreate it.

This turned out to be more complicated than expected, as there is not one standard recipe for turpentine varnish. Eventually I found a Dutch recipe from 1832 listing a turpentine varnish to finish display cabinets for natural history collections.[3] The ingredients are a pound of oil of turpentine, 8 ‘loot’ (a loot being 1/32 Dutch pound) of white resin, four loot of Venice turpentine, and ½ loot of aloe or kolokwint. Raw larch turpentine has a high concentration of volatile oils that can be distilled. The fluid part is known as oil of turpentine, whereas the residue left in the retort is usually called resin, rosin, or colophony. Oil of turpentine is the essential oil that remains after distilling raw larch turpentine. Venice turpentine is a thick, viscous exudation from the Austrian larch tree, which is not used as a varnish on its own as it becomes dark and brittle when exposed to oxygen and light. Aloe vera is widely known; kolokwint (the Dutch name for Citrullus colocynthis or bitter apple) less so. It is a plant with yellow fruits that resemble small pumpkins, which are very bitter and poisonous. That quality might explain its presence in a recipe for a varnish that is meant to ward off insects. Powdered aloe is readily available from artist’s material suppliers, so I went with that. 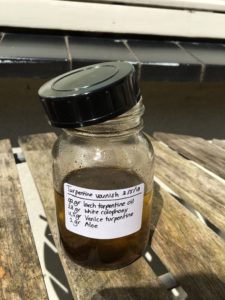 The varnish after 10 hours in the sun. The Aloe is the clearly visible murkiness on the bottom. Photograph: author.

The preparation of the varnish was pretty straightforward: put all ingredients in a bottle, cover, and leave in the sun for a day. The only problem was that I had to wait a week for a sunny day. When it came, I put in the ingredients and just left the bottle out in the sun for a couple of hours, which allowed me to stir the ingredients together. The aloe however did not resolve properly, and just sits at the bottom of the jar. While this might not be much of a problem when the varnish is applied to a cabinet, it makes this particular turpentine varnish unsuitable for use in my injection wax. Next time, I will make another batch without aloe and use that instead.

Why do I recount this–admittedly not very exciting–story? It shows how difficult it can be to follow a historical recipe to the letter. It also shows how much you learn from reconstruction research, even if it does not always yield the results you’d like, or as fast as you’d like.

One Response to “The Devil is in the Details: Turpentine Varnish”