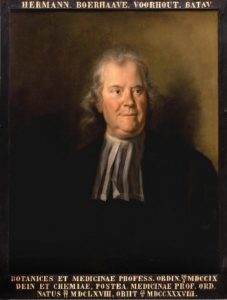 With the introduction of chemistry into the university curriculum in the late seventeenth century, new practical needs arose for students such as being able to perform experiments. Would it be possible to build a chemical furnace that provides a gentle heat, yields no smoke, and is safe for students to use? Herman Boerhaave (1668–1738) believed he found the perfect solution in, what came to be called, Boerhaave’s little furnace.

Boerhaave was professor of medicine, botany and chemistry at Leiden University in the early 18th century.[1] Instead of starting with the most difficult experiments with metals and minerals, he was convinced that students were better off when they learned the techniques of through simpler processes, such as distilling leaves and flowers, and fermenting bodily fluids. But most chemical laboratories were equipped with elaborate devices too complicated for freshmen students, who in the eighteenth century could be as young as fourteen. Moreover, the brick-build furnaces were designed to create high temperatures, in which small and delicate materials like rosemary leaves would burn instantly.[2] Boerhaave hence needed a device that was low-cost, user-friendly, and would provide a gentle heat. 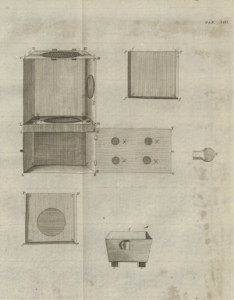 A small wooden oven was the answer. Boerhaave claimed he had designed this type of furnace when he himself was studying chemistry in the 1690s. He opened the chapter on instruments in his chemistry textbook with the words: “I shall begin with my simplest furnace; which I invented forty years ago, when I practiced chemistry in no large study, where there was only one little chimney, and where I required several furnaces at once.”[3] This kind of device was probably inspired by ordinary foot stoves.

These little stoves, also known as foot warmers, were very popular in the Dutch Republic. Coming in a wide variety of shapes (square, octagonal, cylinder), these stoves often feature in books and paintings. Filled with glowing coals or peat, women placed the little stoves under their robes or blankets to keep warm.[4] Many foot stoves were equipped with a wire bail handle for lifting and easy transportation. Such stoves were used in carriages, sleighs, at home and in church to keep one’s feet warm. This ordinary foot warmer got new applications too, namely as tea and coffee stove, and we suspect it was the model for the ‘simplest furnace’ in the Leiden chemical laboratory. 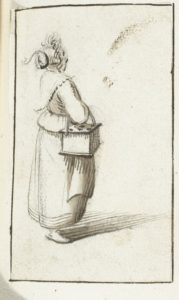 The gentle heat produced by Boerhaave’s small oven proved very useful in performing all kinds of chemical experiments. Take rosemary, for example, the evergreen aromatic shrub. Distilled atop a “violent fire”, it would have been turned to flame, smoke, and ashes. But when rosemary instead was distilled at “summer-heat” (approx. 85º F), the mild operation would instead reveal the most volatile, fragrant and aromatic part of the plant ordinarily exhaled in summer. The same process could be applied to Angelica, basil, and all other aromatic plants. 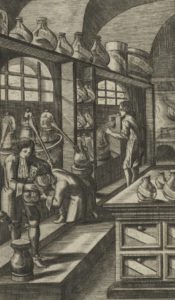 Boerhaave, in other words, attributed the success of his device to one’s control over gentle heat. Whenever the wooden oven was filled with hot pieces of coal or Dutch turf that was no longer smoking, it established a constant and moderate heat that could be kept up to 24 hours. As such, the instrument was perfect for students to perform all kinds of heating processes and distillations. In fact, he was so excited about this apparatus, that he claimed that “I believe eggs may be hatched by it”.[5] Was Boerhaave’s little furnace really that user-friendly and effective as he claimed it was? We checked it out by recreating Boerhaave’s stove and performing experiments with it. Check out our next blog to entry to find out whether we succeeded!

One Response to “The ‘Gentle Heat’ of Boerhaave’s Little Furnace”