Posted on 9 March, 2017 by Marieke Hendriksen
in: Categories: Blogs.

Transmitting Technique Between Disciplines: the Anatomical Models of William Rush (1756-1833)

A travel grant from the Wood Institute at the College of Physicians of Philadelphia recently allowed me to do research in their library and archives. Established in 1786, the College holds a wonderful collection of manuscripts and printed works. As I am particularly interested in the transmission of art technical knowledge in the long eighteenth century between medical men and people we would now describe as artists or craftsmen, I started looking for connections between such people in Philadelphia. I did not have to search long, for Philadelphia in 1800 had a population of only 41,220, but it was a fast-growing trading hub with two medical colleges, and an art academy was about to be established. This meant that many Philadelphians in the middle and upper classes knew each other personally – some were even related.

Philadelphia-born William Rush had started his career as a carver of ship figureheads, learning the trade from his father and the famous Edward Cutbush. He was one of the founders of the Pennsylvania Academy of the Fine Arts (est. 1805), and from the early nineteenth century onwards, he created a number of sculptures for public places in Philadelphia. Caspar Wistar (1761-1818), professor of chemistry and the institutes of medicine at the College of Philadelphia, was a skilled maker of anatomical preparations and models, which he created by injecting organs with wax. However, when the number of students attending his classes greatly increased in the early decades of the nineteenth century, he decided he needed something more dramatic as a teaching aid: enlarged models of human anatomy, which would be visible even at the back rows. Realizing that this surpassed his own modelling skills, he turned to Rush, who made at least twenty models for him. 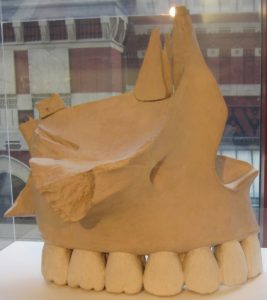 Model of the Right Maxilla by William Rush, c. 1808

As is so often the case when people are physically close, no primary written records –such as letters- remain of this collaboration between Wistar and Rush. However, their collaboration shows that there were strong connections between medical men and visual artists and craftsmen in Philadelphia around 1800. It is likely that Wistar and Rush already knew each other before they started working together. Not only was Philadelphia’s population fairly small, William Rush was a full cousin of a colleague of Wistar’s, the famous Philadelphian physician and professor of chemistry Benjamin Rush (1746-1813). Moreover, Wistar came from a family of craftspeople himself: his grandfather and namesake (1696 –1752) was a German-born 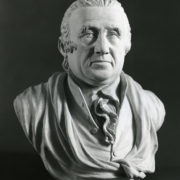 glassmaker. Both Benjamin Rush and Caspar Wistar studied in Edinburgh, and the latter corresponded with Thomas Pole, a fellow Quaker and the Philadelphia-born author of the 1790 The Anatomical Instructor, a handbook that describes, amongst others, how to make anatomical preparations and models from a variety of materials – although wood was not one of them.

So although in this case there is no evidence that Wistar taught Rush anatomy or that Rush taught Wistar practical skills for model making, it is clear that they must have been very aware of each other’s knowledge and skills, and rather unlikely that they never learned anything from each other. In any case, Rush successfully transmitted his technique from one discipline to another: from artistic sculpting to anatomical model making.

One Response to “Transmitting Technique Between Disciplines: the Anatomical Models of William Rush (1756-1833)”