Posted on 30 January, 2019 by Jill Briggeman
in: Categories: Blogs.

By Ruben Verwaal and Marieke Hendriksen 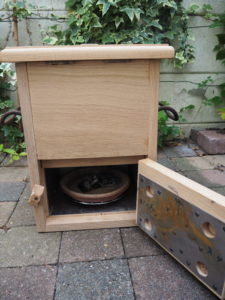 In August of this year, we wrote about our first attempt to recreate Boerhaave’s little furnace from old coal stoves. Meanwhile, Marieke’s dad, André, who is a skilled carpenter, was building a furnace from scratch, using Boerhaave’s description and a nineteenth-century example of a Boerhaave furnace in the collection of Museum Gouda as his guidelines. This resulted in a sturdy furnace of solid dried oak, much larger than the furnace we created from coal stoves.

The interesting thing about Boerhaave’s furnace is that many of the experiments that he described in his chemistry book, the Elementa Chemiae, for which the furnace can be used, required a very moderate degree of heat – one could say a cool rather than a hot oven. Two examples we mentioned previously were the distillation of rosemary, and the hatching of eggs, which Boerhaave said he believed his furnace could be used for too. The kind of egg is not specified, but for chicken eggs, the ideal temperature for hatching is 37,6 Celsius. Could we attain that temperature with our furnaces?

Boerhaave advised to use glowing coals or Dutch turf as fuel, with which a constant and moderate heat should be achieved that could be kept up to 24 hours. As turf is no longer won in the Netherlands, we started with some ordinary barbeque coals – and indeed managed to establish a fairly constant heat of around 30 Celsius in the large oven for an hour or so. But coals did not hatch any chicks.

Suspecting that turf may give better results, we set out to buy turf, which is still won in regions in Germany and Ireland. It turned out to be surprisingly 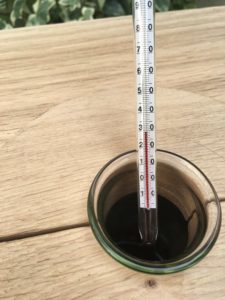 difficult to buy in the Netherlands though. Eventually we managed to purchase a box of Irish turf through the American website of the online retailer we love to hate – but it took eight weeks (!) to arrive.  Though our cool oven still hasn’t incubated a chicken, the first results look promising.

Meanwhile, we started thinking about the experiments we’d like to recreate once we had all necessary materials. Since Ruben wrote his PhD thesis about bodily fluids, he is keen on reconstructing an experiment with milk from different mammals. Preferably, we’d compare the effects of prolonged mild heat on cow’s milk and human breast milk. Raw cow’s milk can be purchased at some farms, so Ruben cycled out to get some, while Marieke hesitantly contacted a friend who was pumping to feed her infant daughter to ask if she was willing to donate some of her leftovers to science. Note for future generations: Marieke has the coolest friends – she instantly said yes! For weeks, she gathered the left overs that her daughter did not drink in freezer bags. 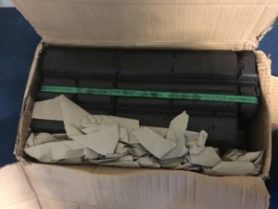 Figure 3: Irish peat via the US

Suddenly, it is December, and we have two furnaces, a box of Irish peat, and milk in two freezers. Now we ‘only’ have to make time for this reconstruction experiment… We live an hour apart and this is our pet project, so we’re desperately searching for a couple of days when we can take time off from work. It turns out that the most difficult aspect of this reconstruction project is not the building of the furnaces or the sourcing of the necessary materials, but the absence of what Boerhaave obviously did have: cheap labour in the form of young assistants, who could take turns keeping the furnaces going day and night. We can only hope that once we do manage to take those days off, the Dutch winter is still as mild as it has been up till now!