Vicissitudes in Soldering: Reading and Working with a Historical Gold- and Silversmithing Manual

By Thijs Hagendijk and Tonny Beentjes

In 1721, the Dutch craftsman  (1674-1722) published a Guidebook for Upcoming Gold- and Silversmiths. Intended as a manual to educate young novices, the Guidebook discussed a variety of different practices, techniques, and skills that ranged from assays to determine the quality of precious metals to sand mold casting and polishing. (Fig. 1) Four different editions, including one pirated copy, appeared in less than fifty years, attesting to its popularity. The book was explicitly aimed at teaching young readers how to do and make things. Van Laer reassured readers by saying “there will be few young gold- or silversmiths, who won’t find anything to their liking and benefit while reading this book; they will be led by hand to the knowledge of many things.”[1] Yet, however confident Van Laer might come across in this passage, there is sufficient reason to question the actual success of Guidebook at explaining and delivering these skills. Practical knowledge is often better demonstrated than written down. Van Laer was very well aware of this fact and offered disclaimers warning his readers that full comprehension of the text was only achieved when complemented with manual instruction. This begs the question of what could, in fact, be learned from the Guidebook.

The best way to answer this question is to look at historical evidence, primarily in the form of marginalia or other signs of usage, that indicates how the Guidebook was read and used on the shop floor. Unfortunately, not much of this evidence has survived for reasons that historians Natasha Glaisyer and Sara Pennell have observed in their study of early modern didactic literature. They note an irony in the fact that books that were most read and used did not make it to our libraries.[2] Indeed, most Guidebooks that reside in Dutch libraries are neat and almost spotless copies – we even found a copy with its pages still uncut! (We ended up cutting its pages almost three hundred years after publication, but that is another story). This virtual lack of historical evidence pushed us in a different direction. We decided to approach the Guidebook experimentally by performing historical re-enactments. By reading and working with the text as if we were learning how to make and do things, we were able to get a better grasp of Van Laer’s potential audience and the role the book might have played in historical learning practices and the acquisition of practical skills. The re-enactments gave rise to various insights.[3] In this post, we discuss one specific result, which is a story involving both success and failure. 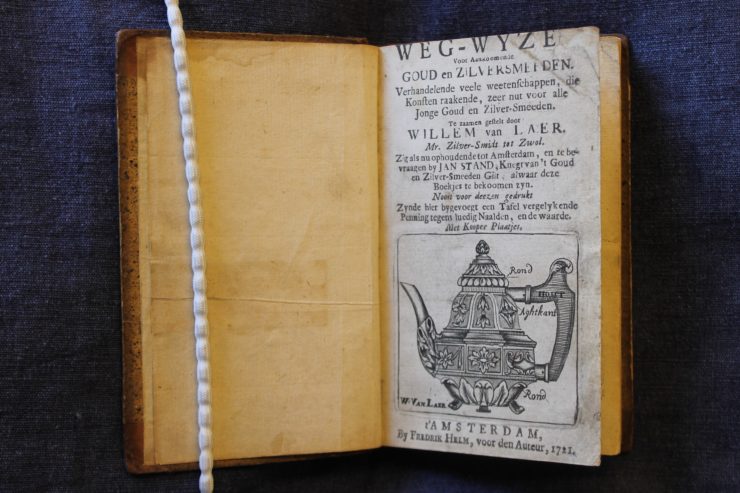 Part of Van Laer’s discussion of soldering features the introduction of a “convenient soldering lamp.” Even though the better part of soldering usually happened in the forge, Van Laer presents his soldering lamp so that “the maker won’t need to put the entire piece back into the fire for a tiny leak or mistake only.”[4] For a silversmith, putting a soldered piece back into the fire was always risky as the soldered joints could melt again and cause more trouble than initially was the case. The preferable method was to repair a soldered piece without having to expose it again to relatively high temperatures, which is where the soldering lamp comes in. Basically, the soldering lamp resembles a modified oil lamp with an extended snout. To reach temperatures high enough to melt the solder, one had to use a small blowpipe to blow additional air through the flame. Skillful blowing would subsequently result in a second tiny yet feisty blue flame hot enough to locally melt silver. That is, at least, what Van Laer seemed to suggest: “when the tip of the flame of such burning Lamp is blown against the spot that needs to be soldered, it makes it hotter over there and the solder will easily run.”[5]

To find out whether we could indeed solder this way, we decided to build a soldering lamp following Van Laer’s instructions. Luckily, Van Laer was meticulously detailed with respect to the lamp, discussing its dimensions and the materials needed to produce it. According to him, the lamp should be made from brass and should measure 3 inches across and 1 inch in height. Additionally, there should be a wooden handle at its back and at the front a snout of about 5 or 6 inches long. To make sure he was well understood, Van Laer also included a schematic engraving of the lamp (Fig. 2). We had more than enough information to work with, and based on his drawings and instructions we produced a much-desired replica of the lamp. (Fig. 3) We also laid our hands on a few historical blowpipes. Now that we had the materials, we could learn to handle the tool. 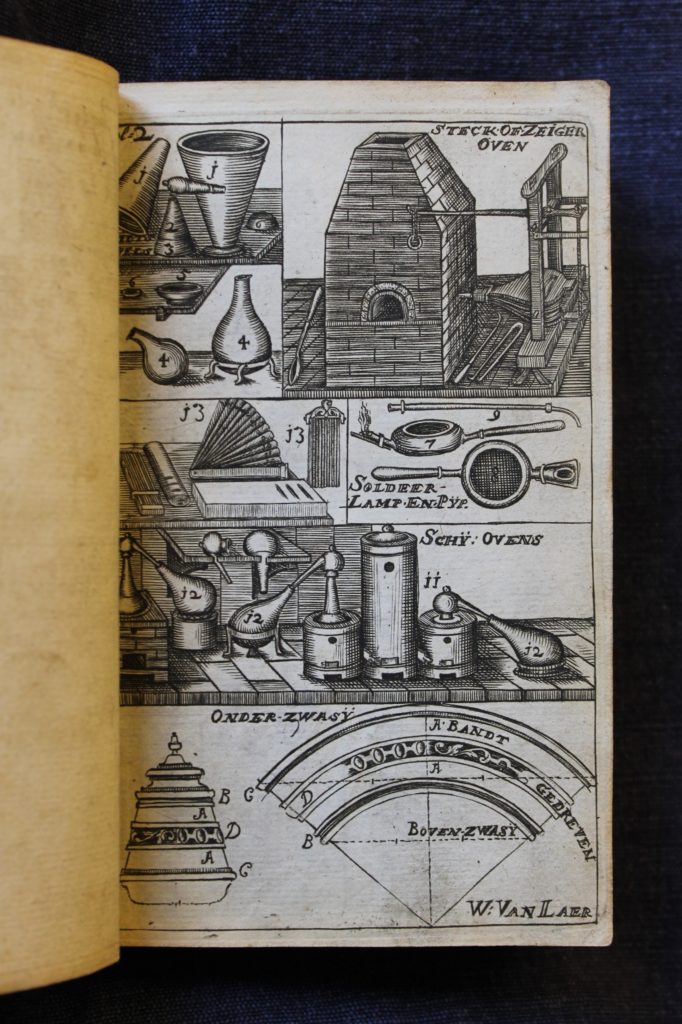 Figure 2. Engraving of gold- and silversmithing tools. Numbers 7 and 8 indicate the soldering lamp, number 9 the blowpipe. Copy of the Guidebook held by the Rijksmuseum Library, Amsterdam (Call number: 305 E 33). Photo by Thijs Hagendijk. 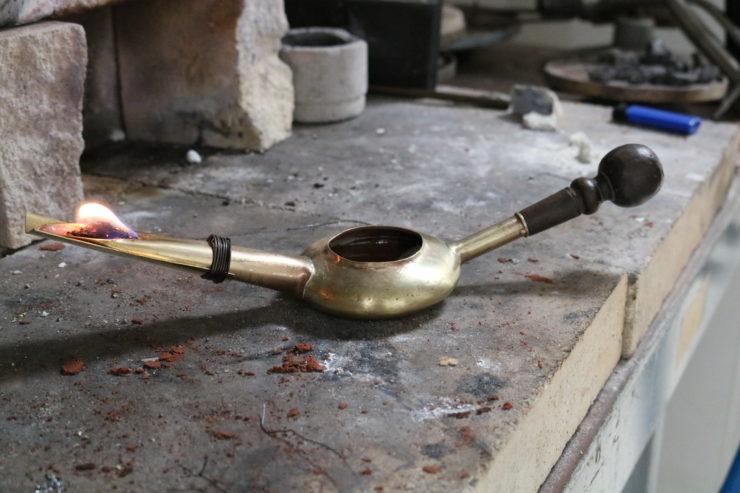 We filled the lamp’s reservoir with olive oil and stuffed its snout with a cotton lump. When we finally lit the lamp, the burning oil filled the room with a scent of grilled food. As an initial exercise, we took a small brass strip and tried to heat it until it started to glow. Here is how it went down, as recorded by Thijs in our fieldnotes:

Glowing the metal strip did  not happen before we learned our first big lesson. Intuitively, Tonny and I started out by blowing hard through the blowpipe. The more air, the hotter the flame we thought. After trying for quite some time, it seemed as if we weren’t making any progress. We could steer the yellow flame, but were not able to get the blue flame where we wanted it. Yet, after I tried some more, it suddenly appeared that I had been blowing way too hard. By blowing rather softly on to  the flame, suddenly the little blue flame emerged. In general, the blowing required much exercise. When later that afternoon a visitor dropped by for an interview, we saw the amount of skill that we already acquired. She too tried to produce a feisty blue flame by blowing through the flame, but did not succeed. To my own surprise, I was immediately able to point out what went wrong. The tip of the blowpipe should almost touch the pit of the flame, while one should blow out of the flame, both from beneath and from the inside-out. Cheeks filled with air, meanwhile breathing in, breathing out, breathing in, breathing out, filling the cheeks again and keep blowing at the same time. A rhythm occurs in blowing and breathing, which maybe most resembles what happens to your breathing when running. (Fieldnotes Thijs, April 4th, 2017.)

Until this point, then, the story was quite successful. We were able to reverse-engineer the soldering lamp, and, like Van Laer explained, we could reproduce the feisty blue flame. Moreover, the blue flame proved rather hot indeed, as indicated by the different oxidation colors on the brass strip. However, as soon as we tried taking it to the next level, we ran into trouble.

Still happy with the progress we made, we now wanted to solder a very basic joint. We took another brass strip, hammered it round, and set out to solder its ends together to make a tiny cylinder. We fixed the cylinder in a standing pair of tweezers to free both our hands so we could steer the soldering lamp and hold the blowpipe. A little piece of solder was put on top of the joint, as well as little bit of borax, which is a flux used to facilitate the flow of melted solder. We lit the lamp and started blowing. (Fig. 4) 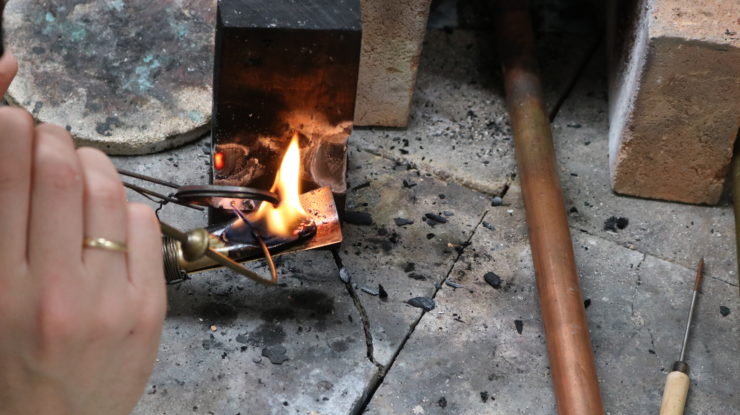 One hour later we were so out of breath that we stopped, but the cylinder had not yet been soldered. We failed. Even though we raised the temperature high enough to make the solder curl up like a drop, we never reached the final state in which it flows out and runs into the joint. Using the soldering lamp appeared less straightforward than we thought it would be.

We were curious to know what went wrong, but after several more days of trial-and-error, the list of questions and issues had only grown. We turned to the Guidebook and read and re-read the passages, only to discover that Van Laer was actually quite silent on the matter. Indeed, he carefully described how to assemble the soldering lamp, but spent hardly any time on how to handle it in practice. Should the object be pre-heated, or could the soldering lamp be used on cold objects, too? We blew and soldered against a piece of charcoal to create a reverberating heat source, but was this also how Van Laer meant to use the soldering lamp? Moreover, what type of solder should we use? Van Laer listed three distinct recipes for solder with different melting points, but did not indicate which one to use in combination with the soldering lamp. To date, we still have not been able to solder a proper joint using the lamp.

Interestingly, if we compare the above experiences with other re-enactments we performed, a general pattern starts to emerge.[6] For example, with respect to sand mold casting, Van Laer vividly described how to prepare and process the sand, but left his readers hanging when it came time to assemble a mold from it. Moreover, in his discussion of chasing, he meticulously described how to transfer a design to silver, but gave no guidance on how to perform the actual chasing process. Why would Van Laer alternate between exacting detail and virtual silence? What does this say about the usability of the book? And what could, in fact, be learned from this text?

The soldering story followed a similar pattern. While Van Laer carefully discussed each and every condition needed to succeed – the soldering lamp, recipes to prepare multiple types of solder, different sorts of fluxes – we failed once we arrived at the procedure itself. Is this due to our lack of skill in operating the blowpipe and soldering lamp, or are there aspects of eighteenth-century soldering that we no longer understand? In any case, the Guidebook’s guiding principle seems to be that core operations are best demonstrated rather than put into words. Van Laer did in fact confirm this with respect to the casting procedure. Just as he came to the very heart of the procedure, he abandoned his detailed exposition, stating that “the molding and casting cannot be learned as well as through manual education.”[7]

During our re-enactments, we therefore came to interpret the Guidebook as a text containing advanced practical knowledge, including tips, tricks, and best practices. Learning new skills from scratch, such as soldering, casting, or chasing, is still best done through manual education, but once mastered, the Guidebook can indicate new routes, spell out different paths, and show new variations on a theme.

[3] For a more elaborate and contextualized overview of the re-enactments performed on the Guidebook, see Thijs Hagendijk, “Learning a Craft from Books. Historical Re-enactment of Functional Reading in Gold- and Silversmithing,” Nuncius 33, no. 2 (forthcoming summer 2018).

[6] Hagendijk, “Learning a craft from books”.